Probably you know this: As soon as you hear a speech about e-steam in any round, at least one person notices: “But I’ve heard that it’s supposed to be totally harmful!”. Harmful, dangerous – more is usually not stuck on “information”. The people seem to be brainwashed, completely unaware of the content, but already with a firm anti-E-cigarette opinion. How is this possible in view of an invention that has literally saved countless smokers? Namely, freed from tar and the thousands of harmful substances that are produced when tobacco is burned, but not when it steams?

Why is that? Well, for years many media, including the public media, have been running a real campaign against e-cigarettes, which does not fail to have an effect on those who have not yet informed themselves about the steam. A particularly bad example was to be visited on 14 April in Frontal 21 (at present still in der Mediathek). In the trailer, the 7-minute contribution was still titled “E-Cigarettes: Warning of the poison cocktail”, which was changed to “Warning of the chemical cocktail” due to protests. However, it did not become better thereby.

Philgood, an expert known from the popular Dampferhimmel-Videos, felt compelled by this underground broadcast to record a video for insecure people in which he takes the broadcast apart in detail and explains the reasons for the media hounding.

Since not everyone has the patience to watch such a “comfortably narrating” video, I give here at least a part of the content in my own words.

Philgood reports that the entire 7-minute programme had no other claim than to spread the opinion of the well-known anti-steam activist Dr. Martina Pötschke-Langer, which has already been refuted umpteen times. How sloppy the filmmakers were in their approach was shown, among other things, by the fact that they consistently addressed their main protagonist with the wrong first name (“Monika”). A trifle, actually, but characteristic of the “care” that was used here on public TV.

Philgood will not go into the content of the individual assertions, lies and untruths that are spread in this article again, since it is the normal propaganda of Mrs. Pötschke-Langer, which we have had to listen to for years: Aromas are carcinogenic, there is respiratory irritation, young people are enticed to smoke by steaming, gateway effect, etc. etc. – all reproaches that are definitely not true, as has been repeatedly proven by studies. (See the links below this posting). However, he dares to say loudly and “with a clear conscience” in the video that the programme was bold and lied about a lot – WITHOUT Fear of criminal consequences!

Philgood sees a particularly audacious approach by the filmmakers in the presentation of the two girls, who were initially introduced as enthusiastic new steamboats and then, supposedly eight months later, interviewed again – but now with cigarettes. But oh wonder: both (!) wore “eight months later” the same clothes as before, the same make-up, the same jewellery, the same hairstyle, the same nail polish and also the eye-catching scarf was draped exactly like “eight months before”. Very very dubious journalism, says Philgood, the viewers are lied to, even downright fooled.

Personal insertion: I screened the girls at the beginning and at the end of the FRONTAL-21 article – and voila – so that everyone could get a picture of themselves:

The photo proof: the photos on the right allegedly show the girls “eight months later”: 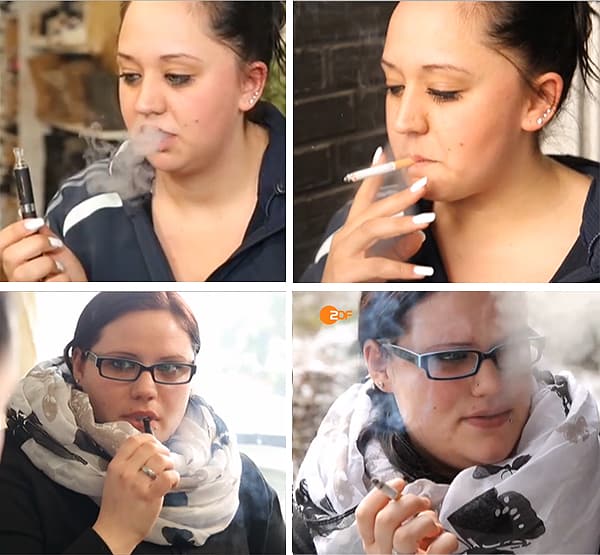 Exit has searched in steamer forums “teenagers E-steamers who have not smoked before, max 18 years – there is no such thing as the Gateway-Effelt from woman …. there is no such thing, it is not provable: Young people just don’t start steaming and then switch to smoking. The two girls were as the “substitute” for these not found teenagers, And that on public TV, paid by our fees.

Why this propaganda? For all of us, steaming is the lottery six in terms of health!

And then the verve left me, respectively I was filled with work and didn’t manage the further retelling anymore!

But there’s no reason why you shouldn’t watch the really VERY informative video yourself – there’s still a lot of interesting stuff coming!

Finally a link to the topic:

Article Name
Philgood explains the reasons for the media baiting against the steam on ZDF and in general
Description
As soon as the speech comes to e-steam in any given round, at least one person notices: "But I've heard that this is supposed to be totally harmful! ✓
Author
Claudia Klinger
Publisher Name
my-eliquid
Publisher Logo